And no, I don't spell them the American way :P

One of the biggest influences on how well my F109 performs has been finding the right tyre combination for the track I race on. Its a small club and still building up so things like track prep are fairly basic, but that just means a bit more of a challenge.

There are masses of information regarding F1 tyres scattered over the various forums and sites on the 'Net, but I've struggled a little to make that information apply to my situation. Sometimes it's not always obvious the sort of surface or prep they use and that can make a big difference to tyre choice. One of the first things I had to get straight in my mind is that,to me, it appears some of the tyre manufacturers have started using the same reference number or compound name for their tyres but it is actually different front and rear. I believe this is particularly true of Shizimu who have labeled their tyres either R or F and then a number, but most seem to run the same numbers i.e. - F1 and R1 together or F3 and R3 together. Given that an F1/R1 combination gives the same grip balance as a Ride B/A combination (which are advertised as B=hard and A=soft) one has to assume that Shizimu have decided to simplify matter and just make their rear tyres softer/grippier than the fronts.

However this idea is totally mine and may not be reality! It DOES however, reflect how the car performs on that brand compared to others.

So here is a list of the brands and types of tyres I've tried and my results and opinions of each.

Kit Tyres - Equate to Medium Front tyres and Soft Rears. According to various forums etc these tyres work on carpet. My experience was that they are too close together in compound to get any balance. Traction goop on the rears helped a little but they only became really driveable using the good ol' superglue ring around then outside of the fronts. However given how this wears off over the course of a race it's not ideal.

Zen – Another foam tyre brand – At first I was determined to go foam instead of rubber so I sourced 25 compound rears and 30 and 35 compound fronts. These are nice tyres and come pre-mounted and trued on nice strong rims. The 25  rears are very similar to the kit rears and the 35 fronts are very similar to the kit fronts, so delivered a similar balance. 40 and 45 fronts are available but I couldn't source them at the time I was experimenting with them. 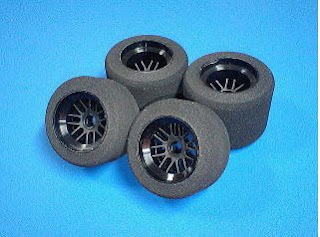 After a brief flirt with foam tyres and having watched the other F1's at my track run around quite happily on rubber I decided rubber was the better option. However, as they were all running F104's I had to seek out my own combination.

Ride – Usually recommended as B(hard) fronts and A(soft) rears. This is an option recommended for F103 cars (and touted to work anywhere) so I tried it on the F109. With some tyre sauce for the rears this might have worked better than it did but I prefer not to bother with being that serious at club days. Its about fun after all. There was better balance than with the kit or Zen foams but given the typical conditions of my track they were still hard work to get around the track consistently.

Shizimu – Initially I could only get the R1 and F1 tyres to try. To be blunt this combo offered no improvement over the Ride tyres as far as balance front to rear, though they did appear to offer slightly higher grip overall. Using Shizimu R1 rears with Ride B fronts did make a car that was almost consistent and drivable but once pushed hard in a race situation it just becomes too easy to make a mistake, as the car feels on the limit of grip all the time. I've now sourced the R3/F3 combination which is supposed to be preferred but as I've found a different combination that works I haven't tried these yet. 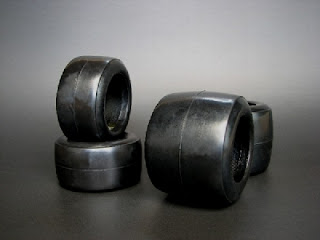 TRG – TRG make a LOT of option parts (some breathtakingly expensive) for the F103 and F104, so a lot fit the F109. I read about the TRG Superion tyres being used in Asia when it rains. A VERY sticky tyre but so far proving to have surprising durability. So far these have done at around 25 runs, without any real loss of performance. They come pre-mounted on an excellent quality rim, though they aren't glued as they don't put the inserts in. I've only used the rears but there is now at least 1 other F109 and a Tamiya F103 (newer arrivals) using TRG Superion on the rear and TRG Hards on the front.

At present I am using a combination of TRG Superion on the rear and Shizimu F3 on the front. This is giving me an excellent and FAST combination with nice balance front to rear. Each end seems to have the grip it needs when it needs it. They also suit my driving style which is important. I also have this combo on my F109LM which also works very well despite having a much higher down-force body compared to a standard F1.
Posted by Adrian at 16:22