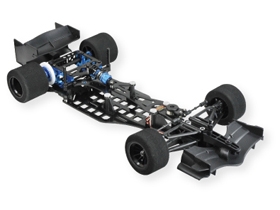 I started racing F1 at the start of 2012 as I was looking for a change from touring cars. Strangely I only considered the Tamiya F104 or the 3Racing F109, I guess because deep down I feel these are the more "traditional" F1 type chassis. In the end the fact that the F109 was only a little over $100 won out and pretty soon there was a kit sitting on my table needing building.

3Racing is a company that's been on the rise for a while and everything I buy from them seems to get better and better, but the F109 was one of their early attempts at producing a whole car and it does show. Basically its a copy of a Tamiya F103 but with a link rear suspension rather than t-bar. Link has been the design of choice for quite a while in the eyes of a lot of 1/12 runners so its not surprising someone tried it here (the new f104 Version 2 is also a link style car). Obviously they've taken their ques from the big manufacturers such as Tamiya and XRay and include a well illustrated and very detailed manual, but occasionally the dreaded translator strikes and it can take a bit of thinking to work out exactly what they mean, but there are lots of detailed pictures so it all helps. All the parts are sealed in labeled bags but they aren't organised quite as well as say, Tamiya does, so occasionally you have to search through the bags to find particular screws or a particular part. All in all if goes together quite well and with little hassles so I've you built a car before it won't be a hassle.

Initial Impressions while building
The plastics are SOFT!. So soft in fact that you can bend some parts almost in half and they don't even make a whimper. I'd already been online and read up on the car before buying so I knew there were parts I'd be substituting straight away such as the front uprights and the castor block in the front suspension. Regardless if you fit the option parts or use the original there is a lot of slop in the front suspension, mostly in where the upper arms mount to the castor block. I had a few packets of 3mm shims floating around in my tool box so I was able to make it acceptable to me. The castor block also doesn't have as much adjust-ability if you use a standard servo. There is also a bit of movement where the wheel's mount on the axle. Again I used so small shims to reduce this to an acceptable level. The upside to this is that you create so adjust-ability in front width though less than 1mm in either direction.
Otherwise its a damn good car. Everything fits together without much hassle and there wasn't anything missing.

First Racing Impressions
I used the kit foam tyres and the kit supplied shock oils etc. On a very basically prepared track it had TONS of steering, but it was also totally undriveable under power. Even the smallest throttle application in any position other than facing straight ahead caused the car to spin. Back to the table and a closer scrutineer of the setups etc showed a few issues in ride height and tweak. I set these to what I felt should be suitable and then back on the track. Some improvement but not enough to make it a good race car. Back to the table and in went a set of hard front springs and a softer rear spring. Again an improvement but still nothing like a car that could make a good race car.

I delved back into my memory banks and pulled out an old trick from the pan car days - a ring of superglue around the outside of the front tyre. I ran a ring around the outside about 5mm wide and tested it on the track. Much better, but it just means that the tyre balance needs addressing before I do anything more serious. 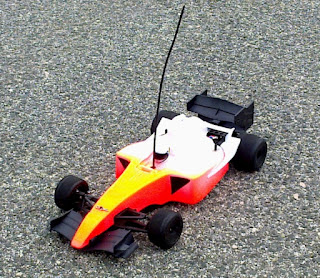 Its all in the Springs