The front suspension of the F109 is lifted almost completely from the F103, but with a 3Racing spin on it. compared to even the most advanced Tamiya front end the 3Racing one has more adjustment available. Now to some this is a good thing but to others in makes the front end fragile and a bit sloppy. Personally, I hover in the middle as far as my opinion of it. 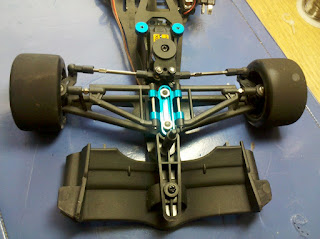 As it's supplied in the box it is all plastic. I had read about that in advance so when I ordered my kit I ordered a few extra bits, mostly the alloy castor mount and the 3.5mm offset front uprights. The castor mount was well worth it as the kit one is rubbish. It flexes and moves pretty much as it wants and, according to others online, breaks pretty easy. The alloy one isn't perfect as it seems to induce even more slop into the front suspension but a few well placed shims seems to cure that for the most part. Remember, you don't want to remove all the slop because it will make the car darty and sensitive to bumps, but you don't want so much that it feels vague and unresponsive.

The 3.5mm uprights are something I used on my F1's in the 90's and they do the same job now. They calm the steering down and make it smoother and less aggressive. Because the F109 has a different chassis and battery arrangement, it has a LOT of steering and I've found anything that calms it down is a good thing. It's also unusual in pan car world not to use offset uprights and most big name 1/12 and 1/10 pan car chassis use offset uprights as standard. Tamiya have also recently released a new hop-up upright that allows either 0mm or 3mm, plus other options for the steering and ackermann. Not the cheapest so they might need to wait a while before I try them. 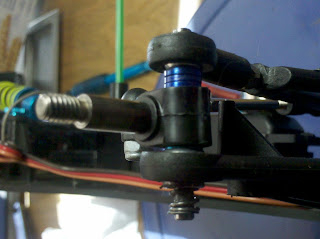 I also modify the upright so that I can create some ride height adjustment. I trim off some of the excess plastic and also use a slightly longer suspension pin. It doesn't give a lot of adjustment (3mm in this case) but it can be enough given the right situation. Right now I am running on a fairly bumpy track so I have it as high as possible.

Another simple mod to do is polishing the suspension pin. This gives smoother suspension movement. Combine this with using something like diff grease or AW grease to give a dampening affect on the front (not unlike damper tubes on pan cars). I also use Associated 1/12 springs instead of Tamiya or 3Racing springs but this is a personal preference thing.

Overall though, the original 3Racing front end doesn't have a lot of fans. Most people that express their opinions online seem to dislike it and switch back the carbon re-enforced suspension from the F103. They also say that they don't miss the adjust-ability from doing this. I say this is BS. In a world where, even at club level, people are looking for every last tenth of a second they car ring from their cars, the last thing you want to do is take away 2, pretty important, adjust-ability options!

I also say to those that say they are fragile and break as soon as it hits something - don't hit things! I've used the original front suspension for over 6 months racing in both F1 classes and sometimes mixed classes as well due to numbers on the day. I've had my share or hits and crashes (one so hard it bent the motor shaft!) and yet the front end has withstood them all. Even now the only problem is wear as the pivot ball's in the suspension are starting to get loose, but 6 months of racing most weeks I am not going to complain, and at a bit over $15 for a complete front end its not hard to keep a few in the parts box.
Posted by Adrian at 16:46