Not the best day!

Not the best day for racing. Cold and wet until about 10:30 before the track dried enough to have a few runs. I focused on my 109LM as it had new suspension to try. I copied it from one I'd seen on another blog and it seems to work quite well, though I think the base settings suggested have induced too much mid to high speed under-steer, though low speed steering and balance still seems nice.

Most exciting part of the day was when the car, which just happens to run a 1/10 version of Mercedes CLR body, decided to emulate it's 1:1 cousin and decided to try turning into a plane (real life example here http://www.youtube.com/watch?v=Ow3rxq7U1mA ). In my case it was the location of a ill placed and unnoticed rock on the track that caused the front to jump up and then it just kept going as the wind got under the body.

This is the end result - 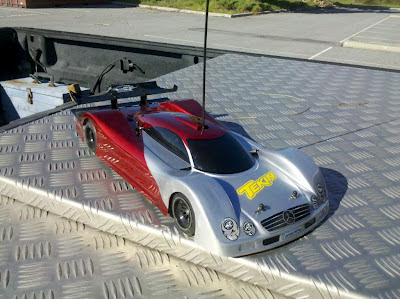 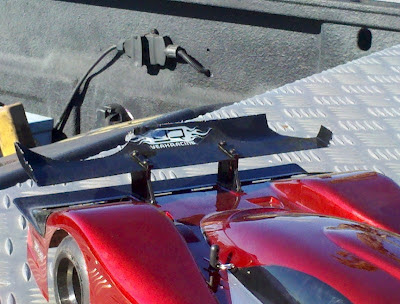 Given some of the issues I've been having with high speed cornering maybe I should go in search of some more front downforce - just in case!

Also not a good day numbers wise. I've never been a supporter of the "race every weekend" style of club, and I think its starting to have a negative affect on this one. Also, there have been some strange comments about the time of year and the weather. I tend to just check the weather forecast and if it predicts dry/fine then I prepare to go racing. This silly thing about "wet winter" and not being conducive to on-road racing sounds like a pretty lame excuse in my book. If you want to go do something else just say so.
Posted by Adrian at 13:21