The good ol' f103 front end definitely has its fans and its worked pretty well for many years. There are a few variations on the theme, such as the one that comes with the F109, but not everyone considers them improvements.

The main disadvantage with the original F103 front suspension is lack of adjustment. While this ensures strength (which is obviously a good thing), serious racers tend to want a bit more of all the technical bits in search of that last 10th of a second. The F109 achieves some of this with the supplied front end allowing castor and camber adjustments, but the downside is the original plastics are soft or prone to easy breakage. There are some alloy hop-ups but these have their own issues and also seem to be getting harder to get.

Doing some reading online, I came across and American F1 blogger who makes up his own version of an Exotec F104 front end but wider to suit the 200mm width. It's actually VERY simple to make and most bits are probably in a serious racers spares box already.

Minimum you will need -
* F104 front suspension mount (plastic or alloy)
* 5mm ball ends
* 5mm ball studs
* 45mm turnbuckles (I used 42mm because I had them but longer would be better)
* original 3Racing upper ball mounts
* Xpress Alloy upper arm joint set - part of their 1/10 4WD Mini. The plastic versions seem to be almost non-existent, but the alloy ones are still around in online shops etc, and they are cheap enough.

I still use the original version though the the "creator" has since switched to a slightly different version which he says offers some advantages in ease of set-up. I didn't have any turnbuckles long enough but I also wanted to just test the concept. It takes a bit of fiddling to get it exactly right, as well as a bit of modifying. For example the original writer says that the F104 suspension mount fits straight on top of the F109 lower suspension, but I found that it needed about 3mm ground off one end to allow it to fit as the lower mount is "stepped" around the mounting holes.

Its surprisingly slop-free for a suspension with so many ball ends, but it seems to have less movement that the original 3Racing front end. It is totally different to adjust though as the rear turnbuckle affects camber and the front affects castor, but they also both affect each other so adjusting one changes the other (this is one area the newer version is supposed to be better). It is a little frustrating at first until you work out in which direction each one affects the other, but once that issue is sorted it comes together quite well. 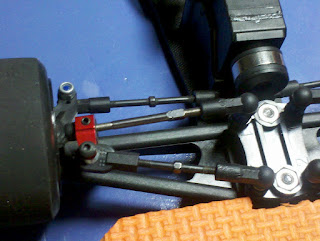 I fitted this to my F109 that I use with a Le Mans body so its not directly comparable to my straight F1, but as both chassis did have a similar basic setup (castor, camber, springs) when I first started with them, I feel I can use the feedback with a fair bit of confidence. So far the LM hasn't seen as much track time as the F1, but this setup does seem to induce a little more high speed under-steer in the car but at the same time the car feels more stable throwing it into corners. Given that I use a 10T brushless set-up in the LM compared to a 17.5 in the F1, this is a actually good change, but since I use a higher down-force LM style body the induced under-steer is a bit puzzling, but I am sure with a bit more track time I can get on top of it

The original version of this suspension is here
Posted by Adrian at 20:14