Back in Nomad Mode

There is not much happening at the moment as my partner and I are back in nomad mode up the west coast of WA. Everything is packed up in boxes and will be for at least the next month, and might stay there as, in a couple of months time, we will be making the trek back across Australia so my partner can start her new job in Toowoomba. There is an on-road club there but at the moment they only race 1/10 tourers and minis, though it appears they did race F1 in the past. I've always intended buying a new tourer once we were settled in one place so that might have to happen.

On that note a couple of things caught my eye over the last couple of weeks on RedRC. First was this new F1 car from Kyosho. Its nothing ground breaking and follows the set pattern of most current F1's, with a pod rear suspension, though it is interesting that it appears to be 200mm and uses F103 wheels and tyres. The front suspension looks nice and chunky but how strong it is will depend on the quality of the plastic. Not being very experienced with Kyosho products I can't comment, but its nice to see more manufacturers taking F1 seriously again.

I am still waiting to see proper pics of the 3Racing F113 before I decide what might be my next F1 purchase. 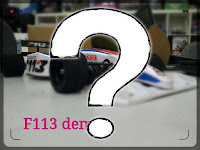 Second item of note is this new tourer from ARC! The main point of interest is that it is 200mm rather than the usual 190mm. Why this interests me is, that for a VERY long time, I've not understood why there has been divergence between electric on-road and nitro on-road. I know a bit of the history of electric on-road so I can understand why they chose 190mm, but I've less information on why nitro went with 200mm, especially as some of the first commercial nitro tourers that I raced were 190mm, though we used 3mm offset wheels to reach close to 200mm anyway, because some other brands had chosen 200mm. I've also found 200mm cars a little easier to set up but that could just be an idiosyncrasy of mine.

I'm also a bit sad as this year I won't be attempting any major events. The last couple of years, despite all the traveling I still managed to attend the Queensland and South Australian on-road titles (a token effort I have to admit but I was still there, and 7th in Stock Tourer at the QLD's is ok), and I only just missed getting to the 2011 Australian on-roads due to a bit of timing issues. This year though I won't get to anything and there is definitely part of me missing it, made more obvious by the fact that, yet again, I'll be reaching QLD (where the 2012 National's are with F1 included) probably a little over a month after the event! Hopefully once there is a bit more stability next year I can do a few more events.

Until then I just gotta keep them wheel rolling.